On September 25, 2020, minutes after hopping out of the cockpit of his #6 Williams FW43 car after a practice round, Latifi proceeded to the Pirelli Motorsport circuit headquarters, where one of the red-walled soft-compound tires he had just put through its paces on the track was waiting for him. With the tire spinning on a balancing machine, Nicholas pressed the blade of the paddle against the tire, creating “Reimagined Rubber” a unique work of art using genuine F1 rubber he had driven on at more than 325kph only minutes earlier.

Nicholas Latifi is a 25-year-old proud Canadian and Formula One driver for Williams Racing. His paddle was hand-finished by him at the Russian Grand Prix on Friday, September 25, 2020.

Artist Sarah Skrlj, poses with her paddle for this year's collection. 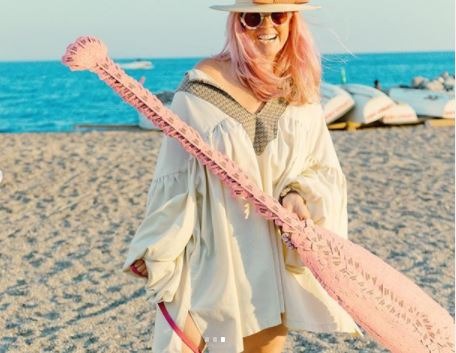 Designer Tiffany Pratt with her paddle: "The message behind my paddle is that we all come into this life with a ticket for one. But once we all get here we realize we are not alone & that we are ALL one.”